During May 2014 Malcolm Hay received a volunteer award at the annual volunteers cocktail party at Town of Cottesloe’s Town Hall.

Cottesloe Coastcare volunteers are delighted that Malcolm, a CCA member,  received this recognition – particularly for his 40 years of commitment to the Leeuwin Foundation.

“For the past seven years, since his retirement as a prominent Perth orthopaedic surgeon, Malcolm has been a volunteer member of Cottesloe Coastcare Association. During the first four years, Malcolm was involved in the Association’s hands on volunteer work, such as weeding, planting and watering. In recent years, Malcolm has become more involved with supporting school students who participate in Cottesloe Coastcare activities. The Association’s Vice Chair, Robyn Benken, says she regularly sees Malcolm engaging with students: chatting about plants; and encouraging them to consider participating in meaningful volunteering work in the wider community. Cottesloe Coastcare members have described Malcolm as a warm, friendly person, who is a great teacher and supporter, particularly of young people. 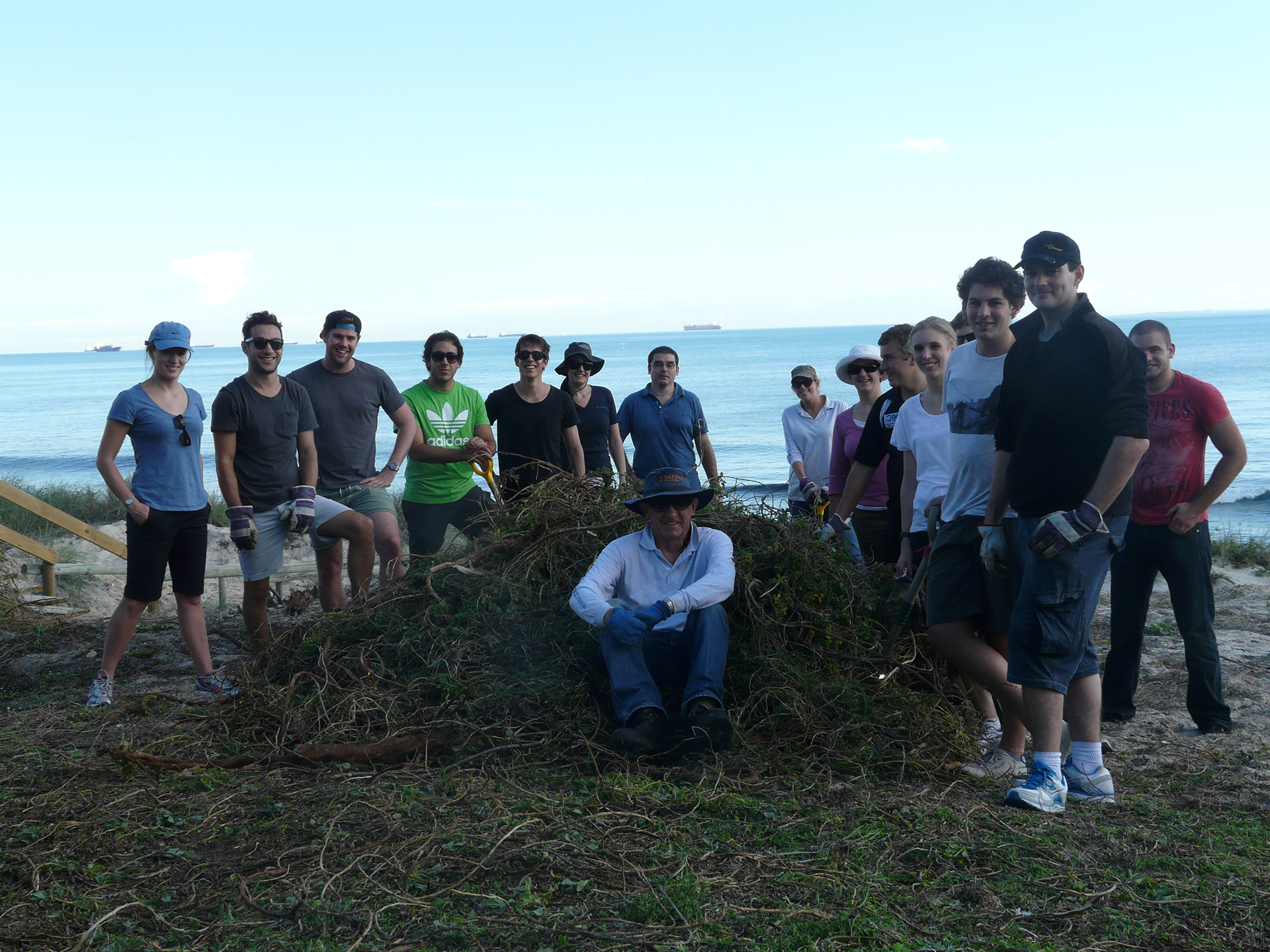 “As well as this, Malcolm’s passion for plants sees him currently volunteer at Kings Park as a part time Master Gardener, in addition to assisting the Friends of Kings Park with their regular Newsletter.

Malcolm’s major role in the wider Western Australian community has been through his involvement with the Leeuwin Ocean Adventure Foundation based in Fremantle, which he founded in 1986. The Foundation is an award winning provider of experiential learning and leadership programmes, mainly aimed at youth – aged 14 to 25 years.

“In 1974, a surgeon at the time, Malcolm Hay sowed the seed of an idea, that 40 years on, continues to provide extraordinary experiences to youth, – and all ages.  Inspired by the establishment of a sail training ship organisation in New Zealand, Malcolm forged ahead with his infectious enthusiasm gathering people together, to give the hope and then life to this huge venture.

With support and commitment from wonderful people too numerous to mention, the  Leeuwin was built and put to sea in 1986.  Since then the Leeuwin has provided amazing opportunities for young people from all walks of life in Western Australia and further afield – to find their feet and sometimes their direction in life.”

On a personal note, I first met Malcolm Hay – as a very junior supporter of the Leewin.  Whilst he was busy raising the wherewithall to build the Saliing ship, he was also drumming up enthusiasm and support from the next generation. It is very easy to be inspired when Malcolm is driving a project –  and several of us in our mid 20s were swept up by his unflagging energy and passion for the Leewin.

Malcolm Hay as a token of Council’s gratitude – I have great pleasure in presenting this Award to you”. (Jo Dawkins, Cottesloe Mayor)

Congratulations Malcolm from all your Cottesloe Coastcare friends. 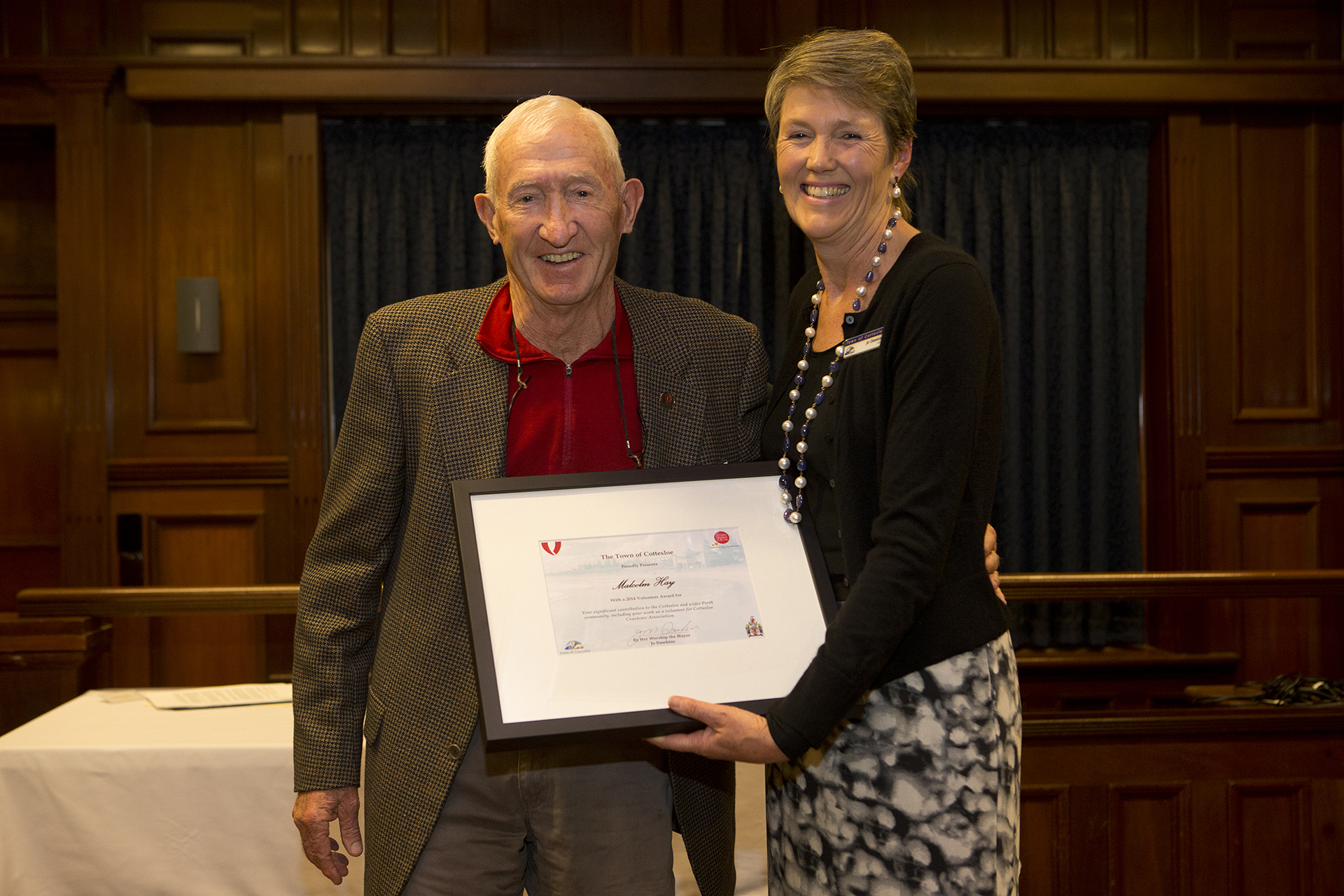 Coastcare for Singles May 2014
Scroll to top