I am very grateful to Lotterywest for sponsoring me to attend two days of the recent conference. It was held over 5 days at various venues around the Mandurah Performing Arts Centre. The first Australian Coast to Coast conference was held back in 1994.

One big highlight for me was the video shown at the opening cocktail party. The video was a collaboration between Perth Region NRM and Ioniq. CCA volunteers had fun being movie extras as the 7kg drone flew above us as we worked on the dunes then filmed the nearby coast.

You can watch the short video here

To find out more about Ioniq and UAV’s (unmanned aerial vehicles) and all the applications – here is the website.

This year’s conference theme was ‘Coastal knowledge for coastal change’. 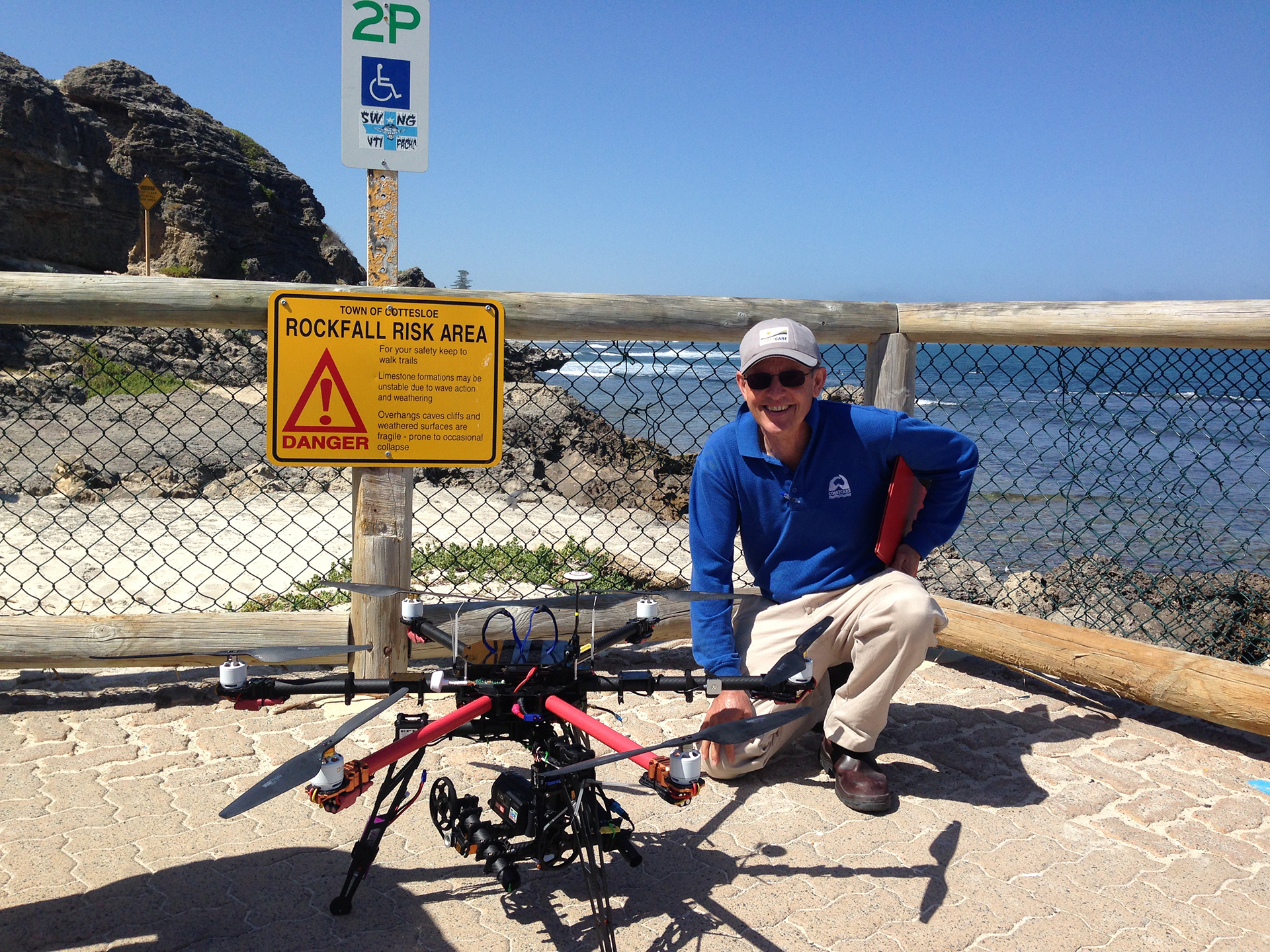 A quote at the beginning of day one summed up something I have always believed concerning our Coastcare work.“You have to know something about it before you can care about it” (Biologist, Sylvia Earl)

CCA volunteers spend much of our time working on the dunes but we also have taken on a role of talking to people about the values of our natural spaces. I think we can say that we have changed the thinking of some Councillors, some Council workers and numerous adults and children as to the many values of our natural areas to their own lives. The battle is of course on-going!

In a video hook up the Minister for the Environment, the Hon. Greg Hunt, MP, reminded us that Australia has 60,000 kms of coast and 85% of Australians live within 50 kms of the coast.

Professor Nick Harvey (University of Adelaide) lamented the lack of  a National Coastal policy. In Australia the states are vested with all land use powers

Paul Robb from Geraldton said: “education is the answer to everything”…this was during a discussion on Day 1,( the Community Day) about the proliferation of 4WD’s and the enormous damage done by 4WD’s to coastal areas in WA. I had not heard the term ‘CUB’ before. I learnt my first new acronym of the conference – ‘cashed up bogans’ !

Dylan Gleave and Brett Dal Pozzo (yes the same Brett) of the South Coast Management Group have worked hard to prepare an off road pamphlet, organise workshops and driver training programmes to educate 4WD owners – with some good successes.

There were presenters from all over Australia and from overseas. Lynee Hale of The Nature Conservancy (USA) spoke passionately about oyster beds restoration in coastal Alabama. Professor Enzo Pranzini from Florence, Italy spoke about the very expensive and ultimately useless beach nourishment and sea wall building in many parts of Europe. Approximately 3000 euros per square metre to apply sand to an Italian beach!

I also learned about the pressures facing migratory shore birds, which end their long migrations in Tasmania. Long term ‘citizen science’, data collection since 1964 has provided a bird numbers data set. Sadly these bird numbers are decreasing rapidly. The paper was presented by Dr Erik Woehler from Birdlife Tasmania.

Beverly Clarke from Flinders Uni, SA believes that “the coast has lost its place in the Federal limelight”. We are relatively lucky here in WA with our Coastwest program but a strong voice for our coast is essential – more now than ever, considering population pressure and climate change challenges.