Sunday 28th May was our ‘nature study morning’ on South Cottesloe beach. Around 100 adults and children gathered for an informal biodiversity survey and a naturalist’s treasure hunt. It was great fun!

Angela Rossen an artist was the driver of the event but Specialists from the UWA School of Biological Sciences, volunteers from Cottesloe Coastcare and Rod Smith from BirdLife Western Australia  were all on hand to help observe, identify and record the plants and animals. 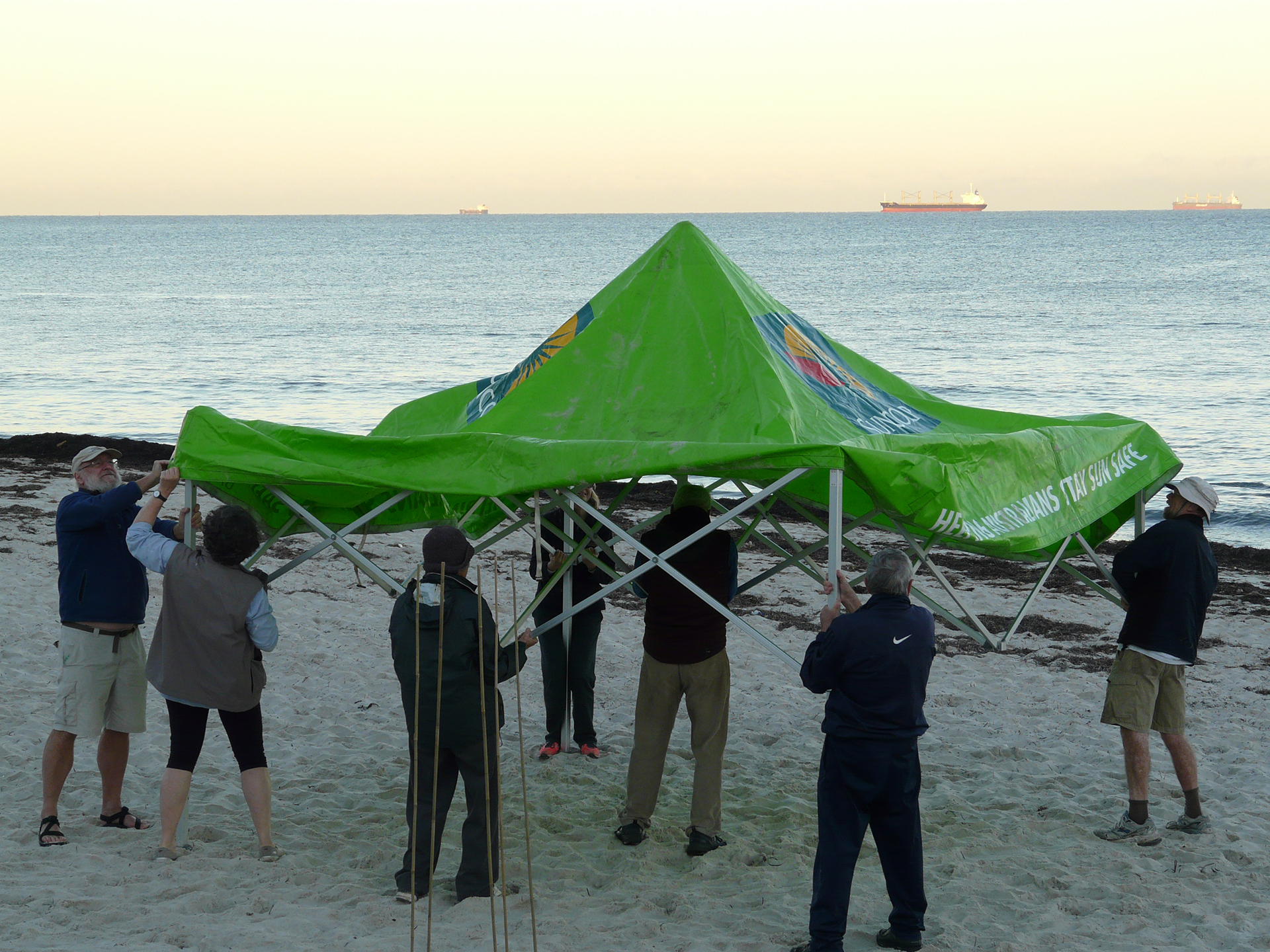 It was a bit chilly at 7am when we set up our big tent but by the time all the excited children arrived it was a glorious, calm, sunny winter morning. 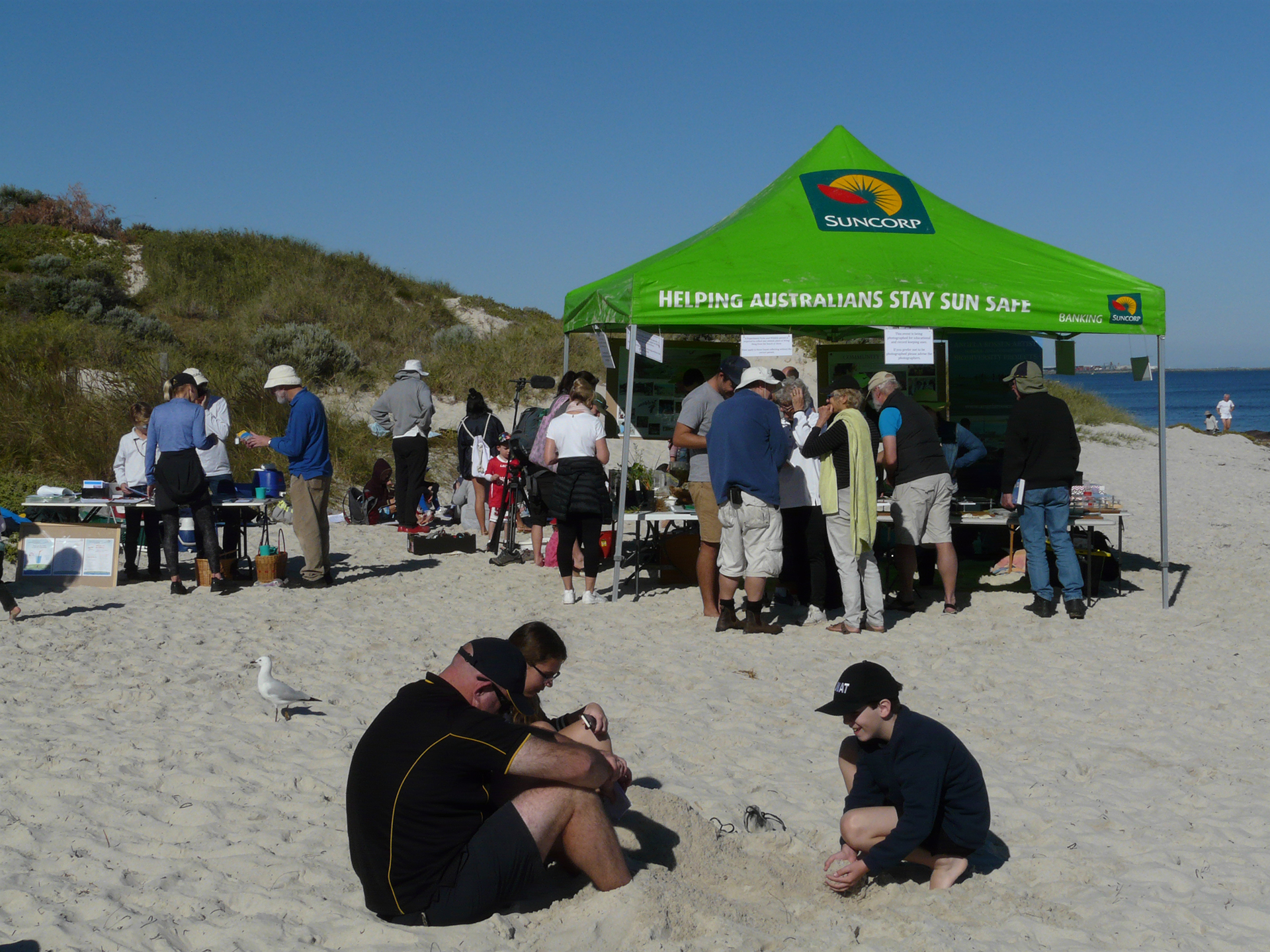 Armed with ‘ local biota sheets’ we could identify some flotsam finds but other discoveries were brought back to the tent for students and scientists from UWA to identify. On display were fascinating collections from Dr Garry Kendrick and Dr Anne Brearley of many molluscs, crustaceans, star fish, sponges, corals,shark eggs,even several amazing sea snakes! We found lots of sponges and cuttlebones, sea tulips, and sea squirts also good examples of sea grasses and algaes. Sadly a dead bird, a juvenile Australasian gannet was discovered too. And as always , too much rubbish – including 8 pairs of sunglasses and several bundles of fishing line and hooks – terrible traps for fish and birds. 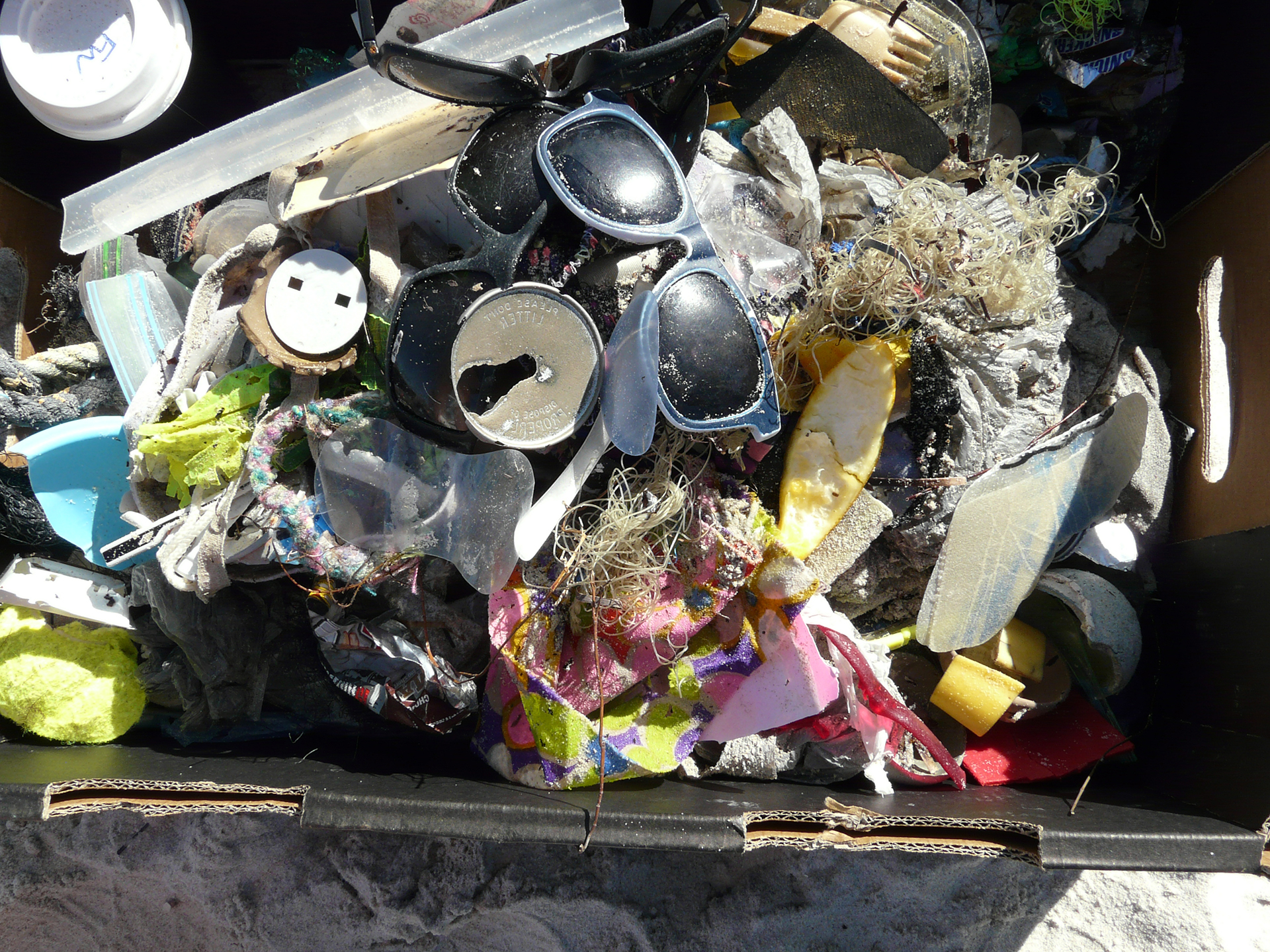 CCA set up some pamphlets and photos of our work and we also had a small display of local native plant species.

Right on cue a beautiful Osprey circled overhead holding a fish in its talons, in fact it circled several times as the ravens hunted it away from the Norfolk pine where it planned to settle. Eventually it landed on a light pole at the end of the Cottesloe groyne, a favourite spot for an ospreys’ breakfast. 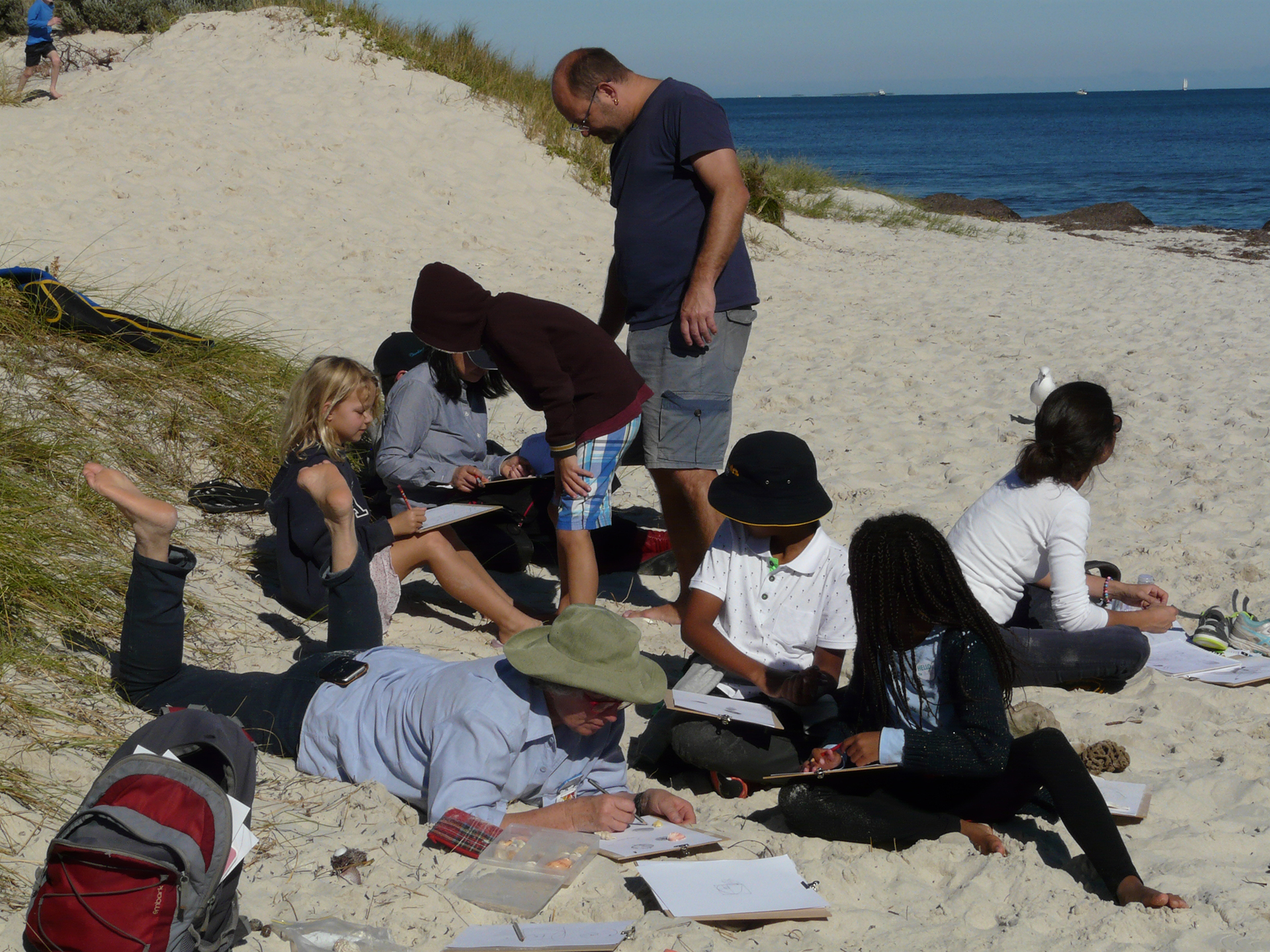 Angela (in foreground of photo) spent time with the children sketching their finds after lots of oohing and aahing over close up views of plants and animals using an isoscope-stand. Angela also showed us how to transform our smart phones into a microscope to explore fascinating details of plants and animals of the foreshore.

It was great to be involved in the event. We believe that people will not care for the environment unless they learn about it and unless they are exposed to the living things that make up our local biodiversity. Only then will people become true carers of this precious place. 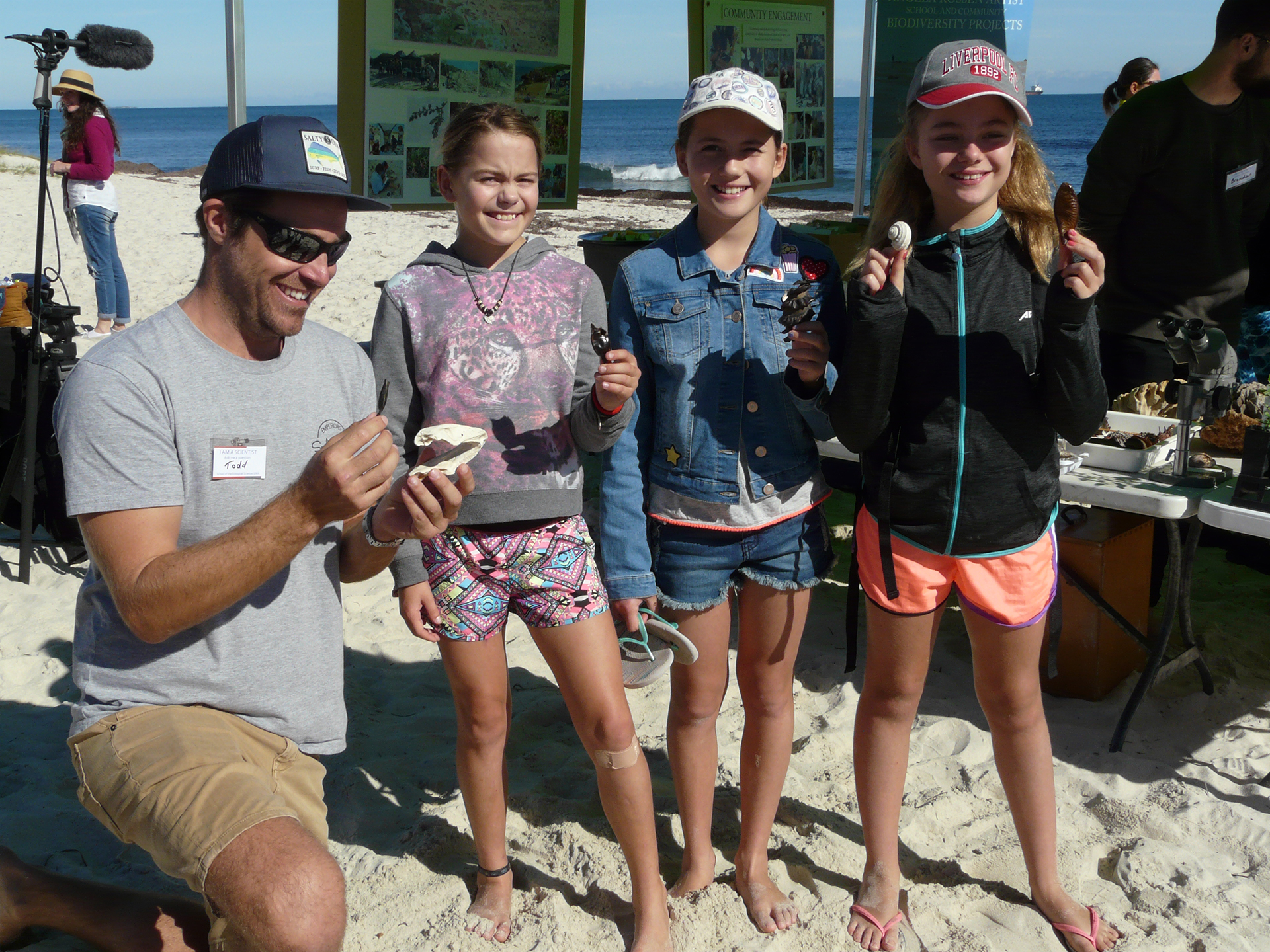 Planting for 2017 is well under way