Mudurup Rocks is believed to be one of the traditional haunts of the crow or warrdung according to Aboriginal oral history. Now the stories from Aboriginal elders have been recorded by Dr. Barb Dobson and Ken Macintyre, local anthropologists with a long connection with Cottesloe … 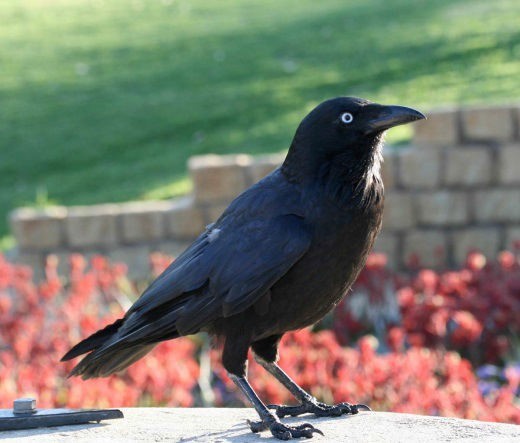 “To traditional Nyungar people ‘Kadjil the Crow man’ was believed to possess the powerful magic of a sorcerer (bulyagaduk) and is said to have had the ability to transform himself from a man into a crow. Indigenous oral history states that Mudurup (or coastal Cottesloe) was one of the traditional haunts (or in Nyungar terms the ’run’) of the crow or warrdung.

In traditional belief crows were the messengers of the rain beings, thunder beings and the wind. Only a powerful sorcerer, such as the Crow man, could divine the subtle unpredictability of these natural elements. When storms approached, the Crow man would announce its coming to his kinsmen, the loud screeching oolynark (white-tailed black cockatoo) and excite the busy movements of the biddit (ants). These would indicate to Aboriginal people the coming of stormy weather (Bodney personal communication 1993).

Bodney stated that it was said by ‘the old people’ that when the warrdung who had their camp on Rottnest Island (Wajemup) visited the coast at Mudurup, they would herald the arrival of the mullet (Mugil cephalus) and salmon (Arripis truttacea). This was a sign of a time of plenty.“