You are here: Home1 / News2 / Archives3 / Congratulations to Mike Ewing

Wednesday 11th May was the annual Volunteers Sundowner at the beautiful, jarrah panelled Town Hall at the Cottesloe Civic Centre. Food and wine was served under pretty red chinese lanterns. Cottesloe’s Mayor, Kevin Morgan, honoured the role played by the many volunteers in our community. Volunteers working in areas of sports, surf lifesaving, cancer support, the Toy library, Friends of the Library, Wearne Hostel, TAPPS, boy scouts, SOS, KCL, Earthcarers and Cottesloe Coastcare and many others, were acknowledged.

The Mayor then presented the 2011 Cottesloe Volunteer awards to ex-Mayor Charles Murphy for his long and distinguished role in local government and to Robert Churchill for his years of helping the elderly and frail in the community and for his work with Meals on Wheels.

A third award was presented to CCA’s popular Chairman, Professor Mike Ewing. Kevin Morgan spoke about Mike’s passion for plants at work and outside work. He said Mike is interested in sustainable farming practices and is widely respected in his field nationally and internationally. He has a particular passion for pasture legumes and continues to explore the use of different pasture plants in dry and saline areas to reduce erosion and to increase farm productivity.

This passion for plants led Mike to Cottesloe Coastcare, where he has been Chairman for over 10 ten years. Mike feels strongly that the work of Cottesloe Coastcare is worthwhile and he enjoys the friendships with the hardworking and creative members who each enthusiastically and efficiently carry out the range of roles that together make Cottesloe Coastcare such a tremendous organisation.

The Mayor also noted that Mike is a very practical person and is pretty handy with a spade! His success in planting the coastal plants in deep holes is legendary. He encourages everyone to dig out that extra spade or two of sand to allow plants to stabilise and grow in their micro environments, capturing any rain that falls and attracting blown humus. Success with these deep holes can be seen most recently at Mudurup rocks where the area has been transformed with robust plants despite an extremely low rainfall over their first growing season. 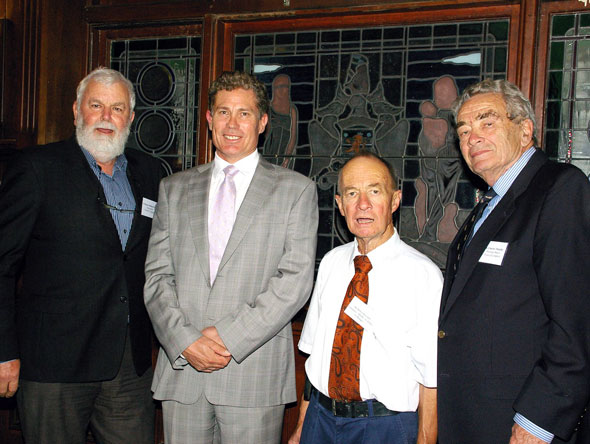 The watering team from Hale