I recently attended a symposium at Curtin University on Coastal Planning and Management in WA.  There was a wide range of topics, from speakers in high planning positions to scientists and researchers to people working on the ground on coastal conservation projects.

First, Garry Middle gave an overview and update of policy, planning and legislation in WA.  In 2001 a draft policy framework was produced by a Coastal Zone Council under the WA Planning Commission.  Then in 2002 an independent Coastal Task Force was set up.  In 2003 the Coastal Planning Cooperation Commission was established, and this produced a document called Directions 2031.  This document contained planning with a doubling of population in mind.  Its key elements were nodal development instead of strip development, building height restrictions, extensive setback distances for coastal development and guarantees of public ownership of foreshores.  Alkimos and Rockingham are examples of nodal development.

Garry outlined the principles on which the revised SP2.6 (State Planning Policy) legislation is based.  First, our coast must be held in public ownership.  All urban water flow should be treated as a potential resource, and the foreshore should not be used for wastewater disposal.  Infill development planning has to start now, in anticipation of future impacts, rather than when the impact occurs. In general, coastal protection works such as sea walls and groynes should be avoided.  If thought necessary, their impacts should be assessed carefully, and it should be made clear who takes responsibility for them and their effects.  People need to be informed as to where it is safe to live. There needs to be significant public participation in the decision-making, and those who participate have to be properly informed and educated before they make decisions. Development issues such as building heights and setbacks from the coast should reflect the characteristics of the locality.  Proponents should have to demonstrate that no harm will be done. Garry invited us to criticise this draft legislation and suggest improvements and we took part in a workshop in which we explored the revisions of the SP2.6 plan.  You can find more details about the proposed legislation by going to http://www.lynnmaclaren.org.au/climate-change-readiness-coastal-planning-and-protection-bill-2012

Professor Laura Stocker of Curtin University spoke about government strategies for adaptation to the coastal effects of climate change: sea-level rise, acidity, changes in ocean currents, nutrient run-off, extreme tides and increased storm-surge.  She said it was necessary to build resilience into ecological, social, economic and cultural planning, as exemplified by the Byron Shire Council’s anticipatory adaptation plan. Some good approaches are direct development back from the coast, planned retreat from the coast, buffering with vegetation to slow erosion, and flexible governance systems.  Building sea walls is not a good strategy, and there is a double jeopardy situation if they fail.  Of course mitigation by reducing greenhouse gas emissions is a fundamental strategy.

Lynn MacLaren gave us an introduction to the WA Greens’ Climate Change Readiness (Coastal Planning and Protection) Bill 2012.  With 80% of the population living on the coast, and planning behind the rest of the nation, she said WA had to promote sustainability around the coast and rivers, and respond without panicking to a predicted 1m sea level rise.  Lynn said that planning has to work with natural coastal processes, not against them.  It needs to protect biodiversity and recreation, not just houses.  Importantly, it needs to make clear at what level the responsibility lies.  For example, should local councils develop plans and be resourced by State Government or should State Government take full responsibility?  Councils are becoming nervous about the climate change readiness because of anticipated liability issues.  She said legislation is needed in order to get ahead of ad hoc activity.  The SPP 2.6 plan complements this proposed bill.

Jenny Shaw, from Curtin University, talked about social change and adaptive responses by fishers in a changing climate.  She carried out a social survey on people living in the Abrolhos Islands and working in the Rock Lobster industry.  The Abrolhos, 60km offshore from Geraldton and very close to sea level in height, are extremely vulnerable to sea level rise.  In 2006 there was a sudden drop in the Puerulus larval stage of the Rock Lobster.  As a result,  there was a change to the crayfishing regulations, in which fishers were given an allocated catch.  Crayfishing is central to the culture and history of the Abrolhos community, and they were very reluctant to change.  Moreover, they blamed the change on the Fisheries Department and management, rather than on the  environmental change that had triggered the change in regulations.   There was a loss of some of the community due to the reduction in the workforce needed, but an increase in tourism has partly made up for this.

Caroline Hofmeester spoke on the socio-cultural influences on climate change decision making.  First, she showed us a brilliant, short video called Welcome to the Anthropocene, which shows in a nutshell the enormous and accelerating impact that human activity has had on this planet over the last two centuries and particularly since the 1950s.  (This can be seen at www.vimeo.com/39048998)  Caroline referred to Dr Graeme Pearman, who has looked deeply into the factors that drive individuals to such different responses to the prospect of climate change.  Caroline said that dominant world-views, led by the mass media, can lead us down the path of conservative values.  Therefore the grassroots movement has to “keep the storyline alive” and declare its values about the way the environment responds to the impact of human activity and that there are “global boundaries” and limits to growth.  Shock value can be counter-productive, but knowledge of the concepts is important, so that people can make up their own minds.  Participatory action is better than the dominant view that everything has to be done by government.

Nick Caputi from the Fisheries Department talked about the climate impacts on fish populations off our coast.  WA has warm, low-nutrient waters because of the Leeuwin Current that brings warm water down the coast.  Its flow is strongest in winter and especially when the La Nina phase of the ENSO (El Nino Southern Oscillation) occurs.  Nutrients brought to the surface in its eddies are significant for our fisheries.  Our local ocean is a Global Warming hot spot,  but the prediction is that the Leeuwin Current will weaken over time.  The oceanic heatwave in our waters in 2011, in which surface temperatures were about 3C above average, wiped out the abalone population at Kalbarri and crabs and scallops in Shark Bay as oxygen levels dropped.  But also, some tropical fish appeared off Rottnest.

Mick O’Leary from Curtin University talked about the impacts of climate change on coastal geomorphology.  He referred to near-shore ecosystems as “carbonate factories”, as they produce much of the material that our beaches are composed of. These “factories” in the reefs are the molluscs, corals, echinoderms, foraminifera and crustose alge whose carbonate skeletons erode and become sediments.  Part of the erosion is done by organisms such as parrotfish and sea urchins that rasp the corals, producing carbonate “sawdust”.  Half of all the sand at Dirk Hartog Island is from the crustose red seaweed Amphiroa.  Global warming is predicted to have positive as well as negative effects on coastal geomorphology.  Higher levels of CO2 will raise oceanic acidity which will break down carbonates, but that will produce more sediments.  Higher temperatures and eutrophication can kill corals but sea-level rise may increase coral growth.   There is a prediction of more intense storms and those storms coming further south.  Such storms will break down reefs but produce more sediments.

There was also a series of “short and sharp” regional community case studies.  One of these was presented by Mike Norman of the Joondalup Coast Care Forum.  He talked about going manual effectively.  He demonstrated a shovel-like tool that his group use to dig a deep hole for planting.  The tool is used as a lever to form a wedge-shaped hole in which no sand is actually removed.   In this way they do not form a crater for each seedling as we do at Cottesloe, but they form a deep hole to allow the roots to penetrate.  This would make the process quicker and save time and energy, but I believe our deep craters are effective in collecting water and protecting the seedling from wind.  Mike also showed us a tool his group designed, which is used for cutting off masses of small weed seedlings at ground level very quickly and easily.  This may be worth adopting if we find we have large areas of small weed seedlings to remove.

I presented our problem of the destruction of dune restoration work at Grant Marine Park by the action of children using the brush to build cubbies.  I found that another Coastcare group are facing a similar problem at Mullaloo but on a bigger scale, and they had no solution either.  One piece of advice I had was to remove the cubbies immediately so that the children gained no satisfaction.  Another was to try to get the children on-side with our restoration work, perhaps by posting a letter in their cubby inviting them to help us in our activities such as planting, weeding watering and seed-collecting.  This is a very positive approach, but would require skilful diplomacy and I feel the chances of success are not high.  As Kate pointed out, we already do considerable work on children’s attitudes by involving local school groups in activities and educating them about the benefits of the work.

In the summing-up after our discussion of the effectiveness of the symposium, one suggestion was for the setting up of a web-based platform – perhaps a blog –  for sharing ideas among coastcare groups or between these and the various planning authorities. 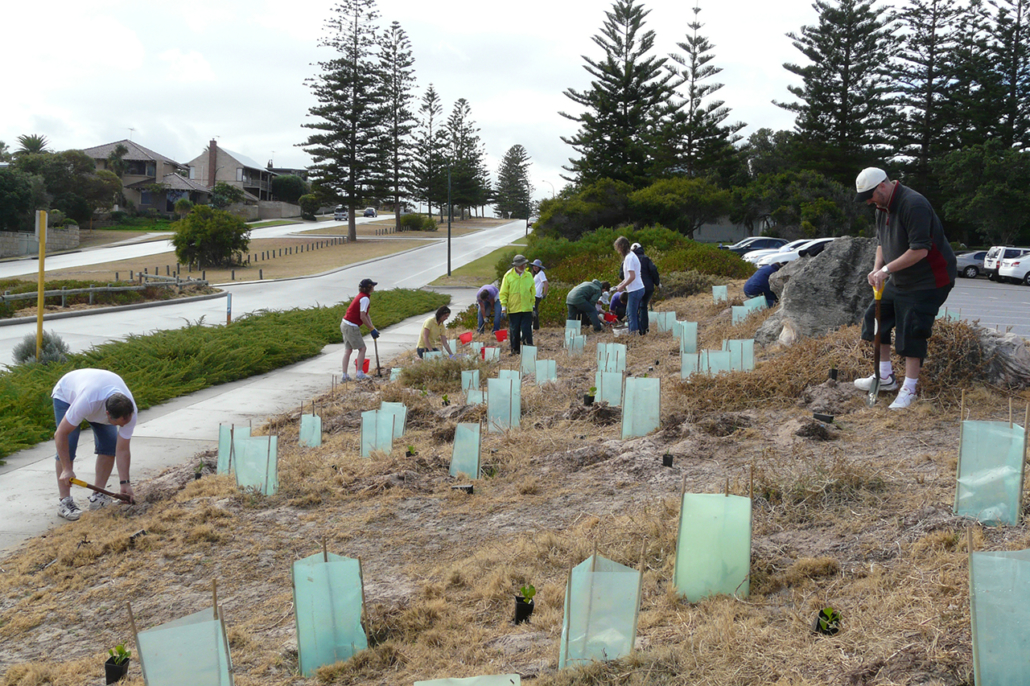 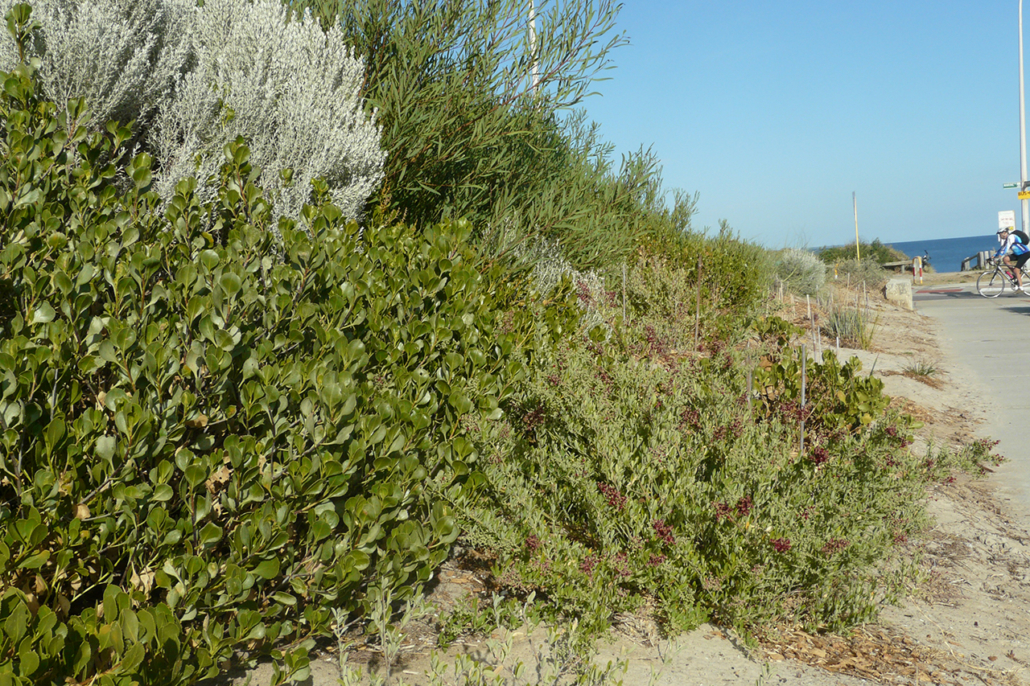 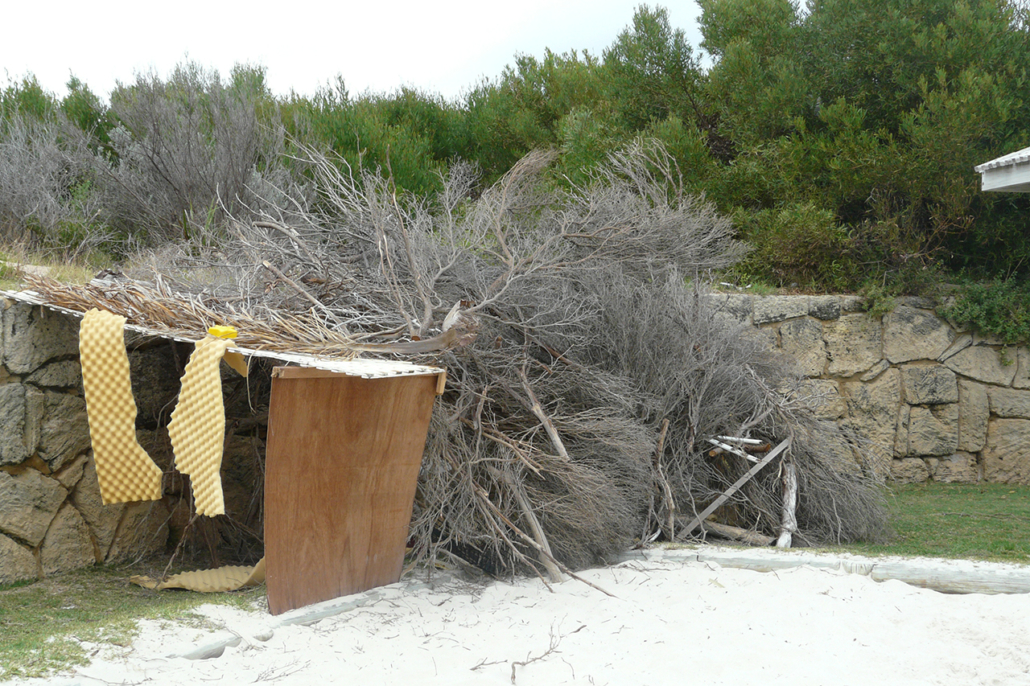 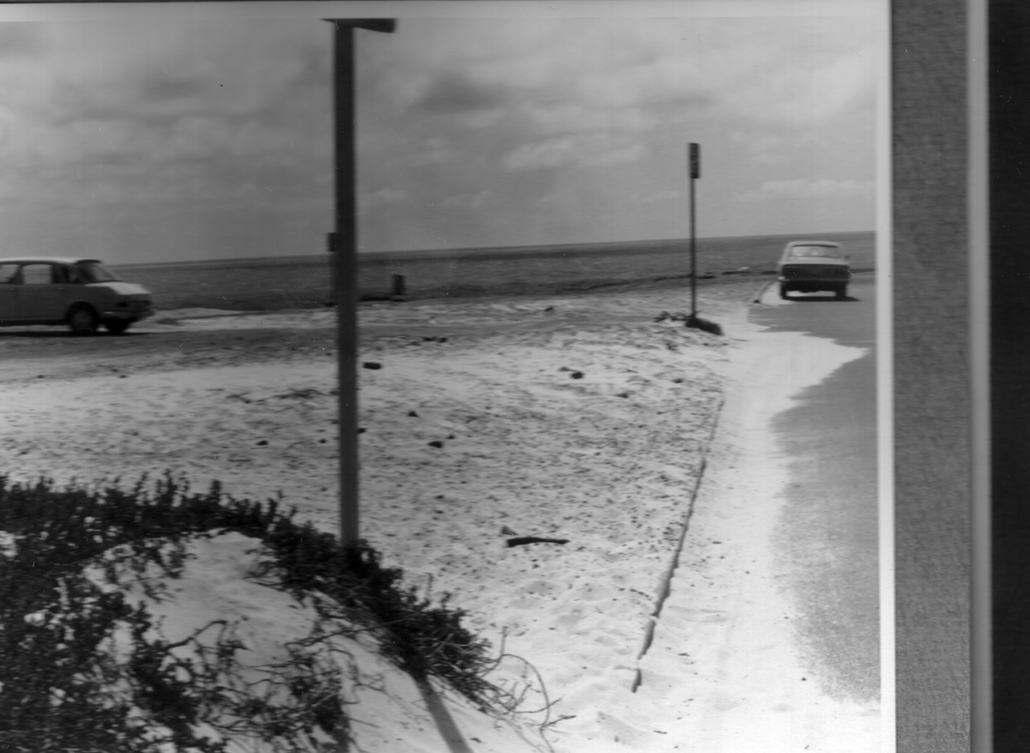