We have had varied weather conditions on our planting days again this year. You might have read an earlier posting about Coastcare for Singles on a very ‘wild and woolly’ day in May! The rains have been very welcome but sometimes it would be nice to have our plants watered in after planting and not the rain pouring down our necks as we work! 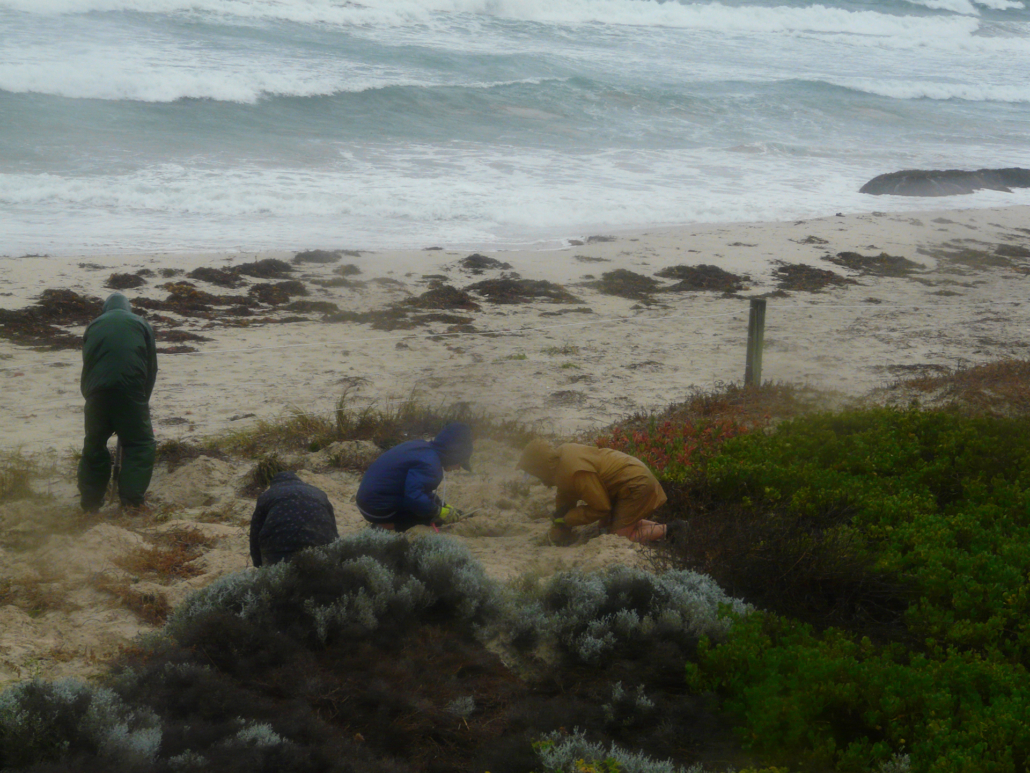 Today – Sunday 6th July was a day of very challenging weather – the forecast was for ‘destructive winds possible…rain and isolated thunderstorms’. Sue Freeth had organised everything beautifully – all the plants and trailer and equipment and morning tea were waiting at Dutch Inn Groyne, in the gloom, wind and rain by 9am. Sue and I wondered if anyone would join us?

But despite the conditions, before long, our hardy team had gathered and got to work. In all we planted about 300 seedlings, mostly Spinifex on a foredune that was previously  covered in lawn grasses and other weeds. Some weed spraying of the site made it possible for us to re-introduce Spinifex longifolius, Rhagodia baccata (berry salt bush), Scaevola crassifolia ( fan flower) and Olearia axillaris (coastal daisy) to the site. We were a very wet and bedraggled lot by the end of our session – but it was a job really well done and a BIG THANKYOU to all the wonderful team. A fantastic effort!

Sue Freeth sent this note to us earlier about Dutch Inn:’If you have ever wondered about the name Dutch Inn – our wonderful local historian Ruth Marchant James explains that the name derives from a shop that used to stand on the other side of Marine Parade near Beach Street. In 1947  August (Gus) Alexander Haye and his wife Heather opened a teashop. Gus had served in the Dutch navy and hence the name.  The teashop was well know for the wooden clog hanging from the front of the store. Before this the empty shop had  been used by  some of the Cottesloe’s first surfers for storing their canvas surf skis’. (Ruth Marchant James. Cottesloe A Town of Distinction. 2007. p 337) 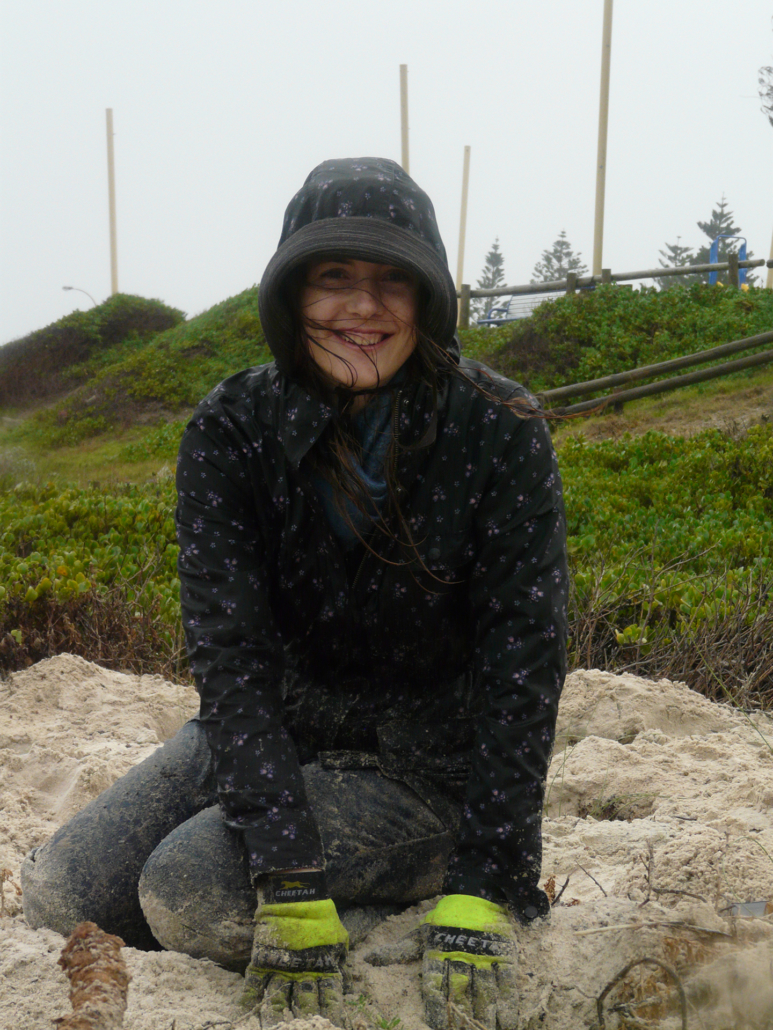 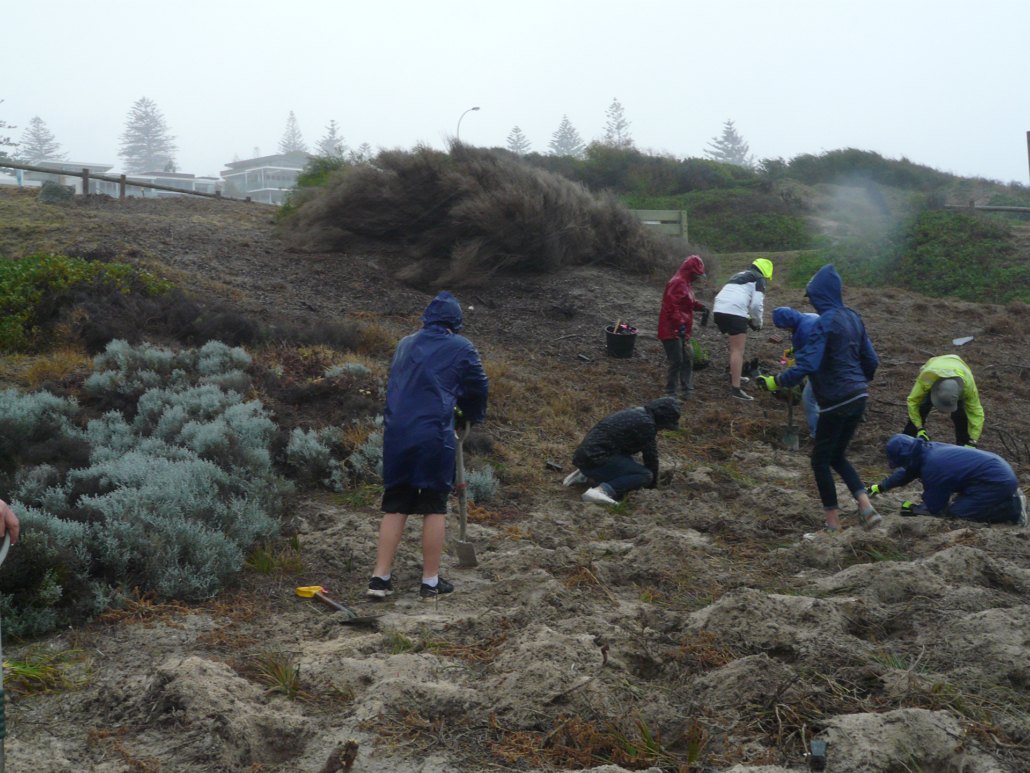 Planting in the wind and rain at Dutch Inn 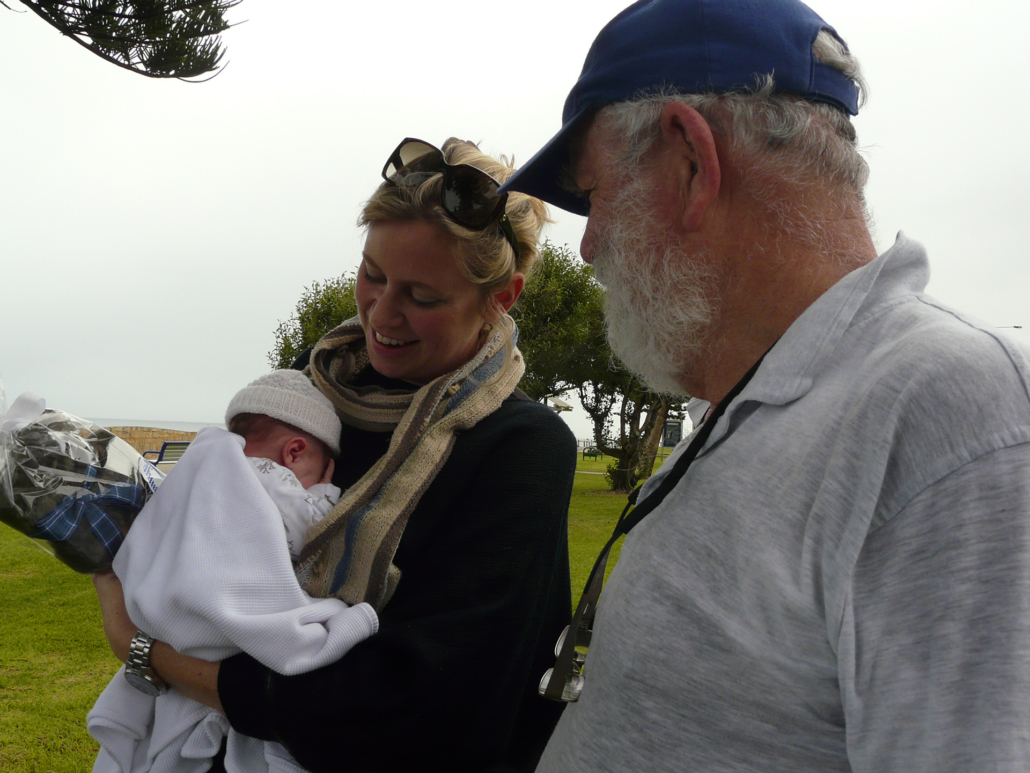 On Sunday 1st June we were pleased to welcome Jonathan Baucke and a team of volunteers from Rio Tinto. They did an excellent job of finishing off the planting on the Napier Street foredunes. We were also very thrilled to have Kate Sputore and baby Alexa join us that day (Jonathan is Kate’s fiancé and the beautiful Alexa’s Dad.) Not only did Jonno and his team work brilliantly – they even brought some delicious morning tea to share with us all! In fact they enjoyed themselves so much they hope to give us another hand with a weeding session in early August.

Welcome to Alex
Scroll to top