Carpobrotus virescens or pigface is one of our toughest dune plants with jewel-like pink flowers now in bloom. Aboriginal people knew it as kolbogo and its fruit was a source of moisture, salts and plant sugars, much like the electrolyte replacement drinks we use today. On the dunes it is a source of moisture in the hot summer months for bobtails and some birds. It was first recorded by Europeans in 1818 when Captain Phillip Parker King noted it on the shores of Oyster Harbour in Albany.

Aboriginal people have known of its medicinal properties  for generations and recent research  has identified  potential therapeutic benefits of a closely related species Carpobrotus rossi. You can read more about this in a fascinating article titled “Will this ancient succulent herb reveal a medical miracle?” written by  local anthropologists Barb Dobson and Ken McIntyre.

We also see the introduced species Carpobrotus edulis which has yellow flowers fading to pink. This was introduced from South Africa and is classed as a weed. 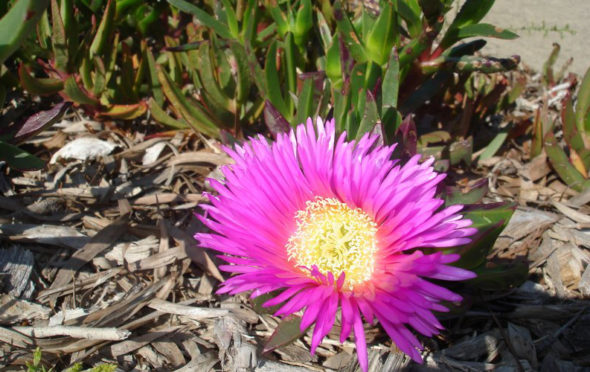 Chloe says – We need you!