You are here: Home1 / News2 / Animals3 / Our coastal reptiles

On Sunday 11th February we had a fascinating presentation from Emeritus Professor Don Bradshaw.

Professor Bradshaw held the Chair of Zoology at UWA from 1976 until 2005 and is now a Senior Honorary Research Fellow. He retired after a long and distinguished career at UWA, during which he supervised over 30 post graduate students, published 3 books and 250 scientific papers. Subjects include Don’s favourite – the tiny marsupial honey possum; also fish, frogs, bees, birds and reptiles – including our local favourite, the bobtail.

Don’s talk was titled: ‘Insights from research on coastal reptiles’. Around 60 Coastcarers and other interested people learnt lots, about bobtails particularly. Bobtails (Tiliqua rugosa), also known as sleepy lizards, or shingle-backs or yorna (Nyungar name) are very long lived, possibly they may live to 50 years and are monogamous. The sexes live apart for most of the year but find each other in the late Spring at mating time. Female reproductive biology is very interesting indeed as is much else about their lives. The live young – one, two or sometimes three are born in autumn.

I am probably not the only one – in my school days we learned that reptiles are ‘cold blooded’. Professor Bradshaw set us straight – humans (and other mammals) are endotherms – we generate our body heat internally by metabolising the food we eat. But reptiles are ectotherms – they maintain their body temperature through external means, such as basking in the sun.

Another coastal lizard is the King skink (Egernia kingii), (very commonly seen on Rottnest Island). Don spoke about a  study, published in the Australian Zoologist, October 2003, by amateur naturalist C. Masters. The study concerned a family of King skinks in a woodheap at Peppermint Grove beach, 250 kms south of Perth.  Long term associations between adults and off spring, also parental protection was recorded over several years. Don said that this social behaviour had not been recorded previously. On one occasion an adult skink drove a Tiger snake away from the skink family’s woodheap!

On the subject of Tiger snakes, Professor Bradshaw and some of his students researched the large and relatively docile population of Tiger snakes on Carnac Island. Some snakes had their eyes pecked out by seagulls, probably while they were raiding nests for young birds. However, several blinded snakes were documented, still fit and well when the scientists had later visits to the island. The Seagull rookery is large and therefore food plentiful, even for a blind snake! They are dangerously venomous but Don’s research showed that their aggressive reputation was mostly about bluff and intimidation. 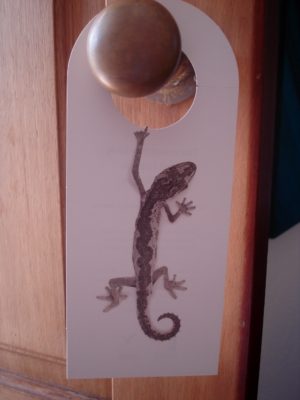 The spiny-tailed gecko (Strophurus spinigerus) is another fascinating local! Most geckos, like the marbled geckos at my place are nocturnal, however the spiny-tailed gecko is diurnal. They have been observed during the day, on branches of Victorian Teatree (Leptospermum laevigatum) near the McCall centre in south Cottesloe. Don suggested that they were resting in part shade and that they hunt for food at night. Research showed that melanin is present on the inside of their skin; this fact plus special pigmentation of their bright yellow iris allows these geckos to be about in the day time. Nocturnal geckos do not have this adaption and would quickly succumb to sun burn.

After Don’s well received talk he kindly answered many questions. CCA thanked Professor Bradshaw with a small gift, then we all shared refreshments and chatted more about our fascinating coastal reptiles!

The spiny tailed gecko on the right is ‘just hanging on’, as you can see! This leaflet was created and donated to CCA almost 10 years ago by Lindsay Medalia and the clever team at 303 advertising . The reverse side message is: ‘Our coastal wildlife can’t hold on much longer‘ and asked people to help us restore the dune environment.  It was a wonderfully successful campaign for us.

Looking for a uniquely Cottesloe gift?