When CCA volunteers did some weeding near Vlamingh Memorial just before Christmas, Frauke and I watched some blue banded bees on Melaleuca huegellii (chenille honeymyrtle) and on Frankenia pauciflora (sea heath). Suddenly we noticed other bees which we discovered later were neon cuckoo bees. They have dazzling patches of blue fur on a black body and purple brown wings. They are natural predators of blue banded bees. Unfortunately I could not get a photograph of a cuckoo bee. (I have attached a free to share photo of a neon cuckoo bee from the internet, with due acknowledgement.) Apparently the female cuckoo bee lays her eggs in blue banded bee nest holes. When it develops, the cuckoo bee larvae eat the food intended for the emerging blue banded bees, which subsequently starve. 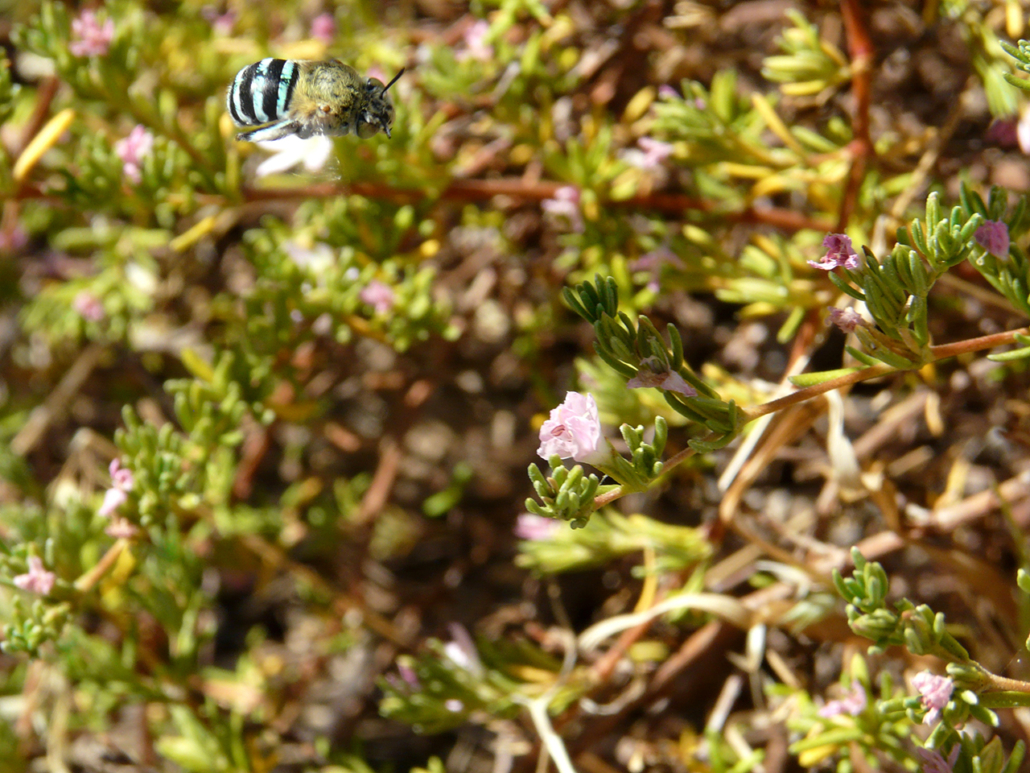 The beautiful Blue Banded Bee has a furry golden thorax and iridescent blue or white stripes on a glossy black abdomen. They grow to 11-12mm. These are ‘solitary’ bees but females may build nests together in the same place.

Adult blue banded bees fly only in warm months of the year (October to April) and die before the winter. Immature bees remain sealed in their cells inside the nests during the winter. They develop into adults and emerge when the warm weather returns.
After mating, female blue banded bees build a nest hole in soft sandstone or clay. Cells at the end contain an egg and food (pollen and nectar) for the larvae when it emerges. Males don’t build nests. They roost for the night clinging to plant stems, fighting for the top spot! (see my photos of blue banded males, settling down for the night on knotted club rush (Ficinia nodosa).

The males have five complete bands and females have four. Blue Banded Bees have large bulging eyes with multiple lenses, and a long ‘tongue’ that enables them to extract nectar from trumpet shaped flowers.They can hover and perform ‘buzz pollination’ on plants such as Dianella revoluta. The honey bee, Apis mellifera, cannot buzz-pollinate. Bees capable of buzz-pollinating clamp their legs onto the anther of the flower and contract their flight muscles so vigorously that the pollen is released. 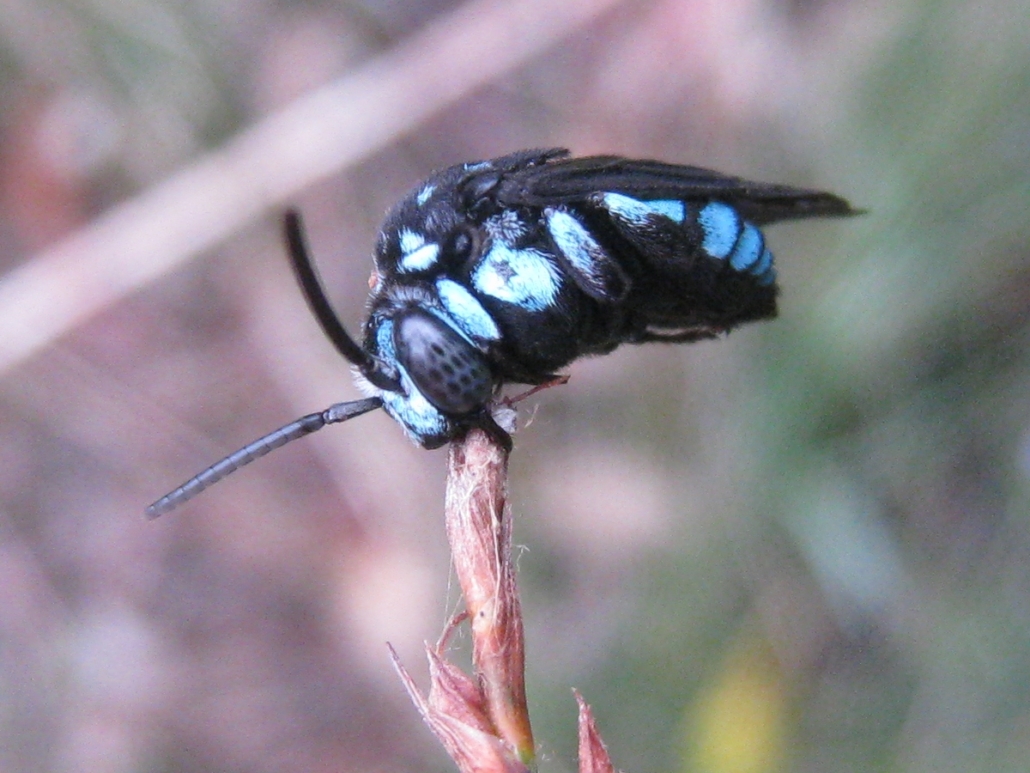 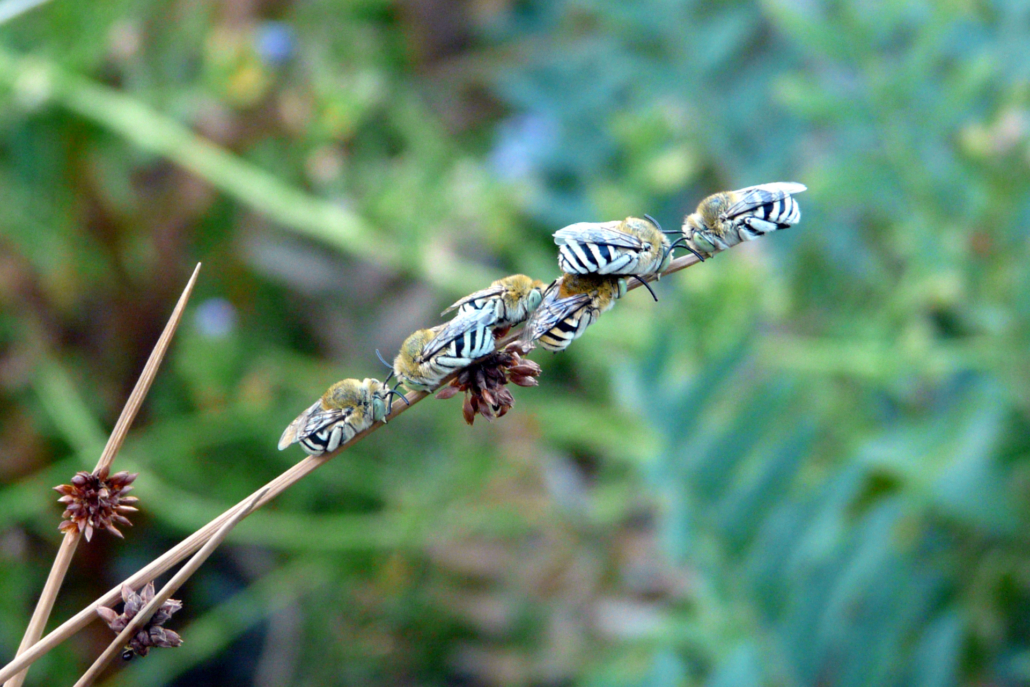 Australia has 1,500 species of native bees.

Only 10 of these species are stingless. In Western Australia (9 groupings / 3 are buzz pollinators)

There are hundreds of species of solitary native bees in Australia in a wide range of colours and sizes. Many nest in burrows in the ground. Others nest in pre-exisiting crevices or holes in timber.

Australia also has some native species of social bees (Trigona and Austroplebeia). Our Australian social native bees are black and only 4 mm long.

All photos used by me on this blog post are taken by me – unless I acknowledge others.

ps: Here is a wonderful picture that Mike Freeth took in Rob and Sue’s garden. 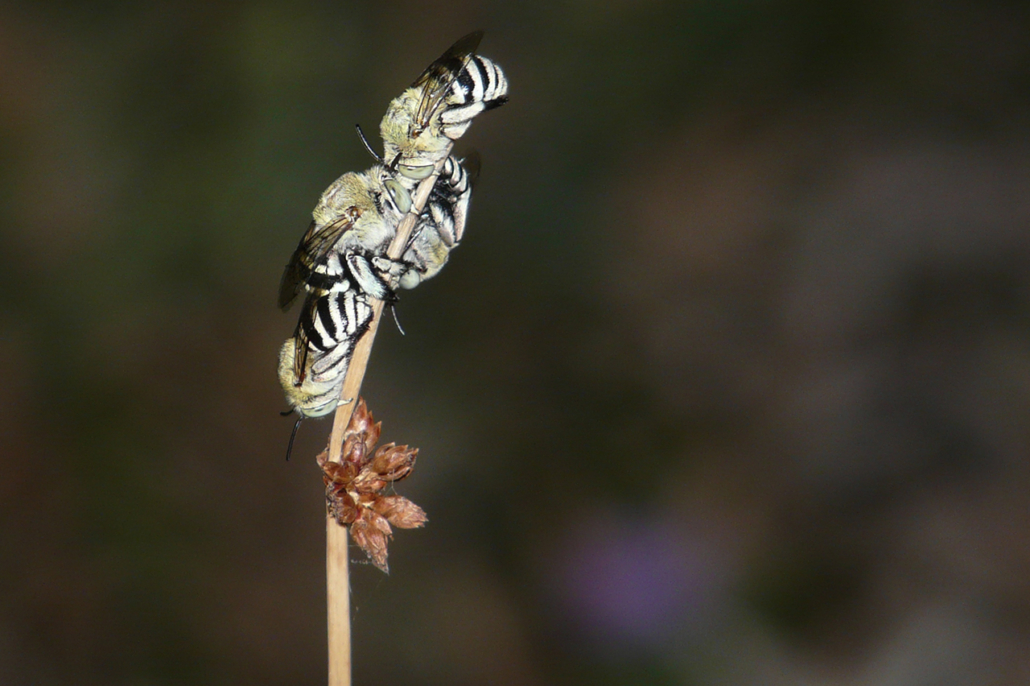 Rising from the Ashes

Cottesloe’s Citizen of the Year 2013
Scroll to top